Let me first summarize Q2, which I didn’t do a full report on. Sales were strong making for a good quarter overall. Average 30-year fixed rates dropped from about 4.35 to 4.20. Despite higher sales numbers, inventory started to rise at the end of the quarter. However, prices climbed for 3 months straight after being stagnant in Q1. This quick rise in prices alongside rising inventory set the stage for a late & lazy summer in Q3…

Sales Volume:
After a bustling Q2 that took prices up 2-3%, it was inevitable that Q3 would see a slowdown. If the hot late summer months weren’t enough to slow buyers down, the quickly rising prices & growing inventory were. If you look at the Stats Link, you’ll see that both average and median prices hit recent highs in the last month of Q2. Thus, Q3 saw a natural pullback from the quick spike in prices in Q2. Also, the inventory of homes for sale hit a yearly high right at the beginning of Q3.  All that being considered, sales volume was pretty consistent in Q3 indicating that the market considered the recent price spike sustainable.

Inventory:
It is common for Q3 to have a higher inventory than other quarters and this year was no exception. However, the rise in inventory really happened at the end of Q2 and the duration of Q3 actually saw a slight decline. Moreover, current numbers for October (1st month of Q4) are showing a big inventory drop from the previous month (which is also a seasonal norm). To further illustrate this seasonal norm, Q3 2014 inventory was within 1% of Q3 2013. Overall, inventory still remains historically low. If you view page 12 of the stats sheet, you’ll see that the rise and fall of inventory in the last 2 years have followed a very similar seasonal pattern, which is encouraging to me. If there is one thing continuing to edge up home values right now, its the lack of supply.  While demand seems to have decreased, so has supply as evidenced by our total inventory numbers being virtually the same as last year.

Loan Rates:
Rates have continued a very steady and slow decline over the last 6 months. They stayed fairly level in Q3 hovering around 4.15% most of the quarter. Most economists expect rates to rise back up in the mid-term. The Fed is expected to continue to hold their recently purchased bonds & keep the Fed Fund rates low for a “considerable time”. (note: see Govt role below for more detail).  Rates also took a recent drop again in October, which is starting another small refi boom.  Buyers are also starting to get the word that rates have been dropping and I expect this should help push us through Q4 with relatively strong sales.

Their are multiple factors that I read in economic reports signaling an inevitable rise in rates, but when will this happen? There is the threat of inflation, rise in Fed Fund rates, and the govt selling off some of their bond assets, all of which will push home loan rates up. When this happens, be prepared for rates to go back to 5-6%. It could happen in 6 months or 2 years – your guess is probably as good as mine, but if you don’t think rates will go back up soon, talk to your parents and view the historical rates chart below…we are still hovering near all-time lows right now at about 4%. 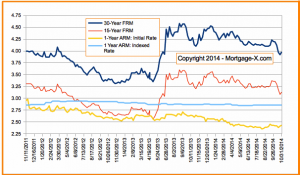 If your current rate is 4.625% or higher, then a refinance may be something to look into. Please send me a note or call your preferred lender if you already have one.

Home Values:
The median & average detached sale prices have gone up about 6-7% in the last year.  That is a fairly level and healthy growth rate. For Q3 specifically prices were quite level most of the quarter following the spike in values realized in Q2. It would seem the market was just enjoying our hot late summer days and maintaing the price jumps from Q2. We are only  about 5-6% away from the peak of the market values from late 2005. What does the future hold? My predictions are below…

Government Role:
The Federal Government has discontinued their stimulus bond buying program after tapering off this stimulus for about a year. While they government has no plans to buy new bonds, it must be noted that they have no plans to sell the current inventory. Here’s a blurb from a Businessweek article that I think summarizes this well:

“Even after the purchases end, (quantitative easing’s) effects will persist. How could that be? The Fed will still own all those bonds it bought, and according to the agency itself, it’s the level of its holdings that affects the bond market, not the rate of addition to those holdings. Having reduced the supply of bonds available on the market, the Fed has raised their price. Yields (i.e. market interest rates) go down when prices go up. So the effect of quantitative easing is to lower interest rates for things Americans actually care about, such as 30-year fixed-rate mortgages.”

Thus, until the fed starts selling these bonds, there will continue to be downward pressure on home loan rates.

What’s next?:
While it’s not that hard to predict the short-term if you have the correct statistics at hand, mid & long-term economic trends are quite elusive and usually prove me wrong. As a real estate broker, I am entrenched on the front lines of the current local market, but don’t have the knowledge or time to follow macro-economics at a national or international level. As such, I don’t make predictions past the short-term and do not advise you to make financial decisions based on my predictions.

Currently, San Diego inventory remains low and has been following typical seasonal trends for almost 2 years now. Rates just dropped to lowest levels of the year, and demand just picked up and is outpacing supply drastically in October. If this demand continues to outpace supply, prices are going to go up, which is what I think is going to happen in the next 3-6 months.

It is my guess that rates will remain relatively level or slightly up in the next 3 months, but I do expect rates to increase relatively soon thereafter. My best guess is that we will see a moderate gain in home values over the next 3-6 months. How much?  I expect moderate increases for the foreseeable future, so a 2-4% increase in the next 6 months sounds very reasonable to me.  It is my feeling that we are where we should be now regarding home values and that we should start seeing the typical healthy 4%/year growth which is the San Diego average over the last 50 years.

And thank you for your referrals – they are the foundation of my business at over 90% the last couple years.

ps. feel free to check out my San Diego Green Homes site if you have a passion for living green and contact me (cell: 858-761-1707) for a free consult regarding how to green your home.